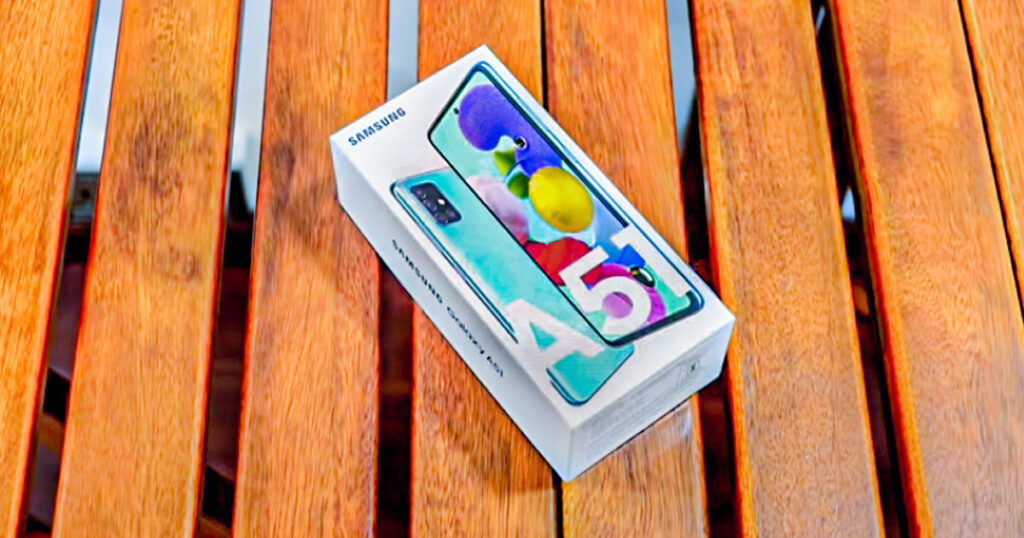 This is a review of the Galaxy A51 (8GB + 128GB), a midrange device released by Samsung in 2021. The recent Galaxy A series, which is so complete that you will not be interested in the Galaxy S series at all (personal impression.) Samsung, who is switching from the Galaxy A50s to the Galaxy A51, also reviews the actual machine with a laughing maniac I will continue to do it.

In my opinion, this transfer has many merits for me, and I felt that it was a very good smartphone even when considering the model alone. The Galaxy A51 is a model that can be confirmed to be available in Japan as an imported product. Besides, DoCoMo and au have officially announced that a new model called Galaxy A51 5G will appear. Of course, the price range is different because it is a 5G compatible model, but since this model is based on the Galaxy A51, many are similar.

The accessories are a simple configuration like a Samsung smartphone. The charger that supports 15W high-speed charging is white, which matches the body color, and the author’s tension is up.
Other than that, there was a USB Type-C cable with a very practical design, although it was dull like Galaxy and cheap earphones that no one would use.

Fortunately, a transparent TPU case was also included, but this time I will use the TPU case made by Spigen. The quality of the TPU case that comes with the Galaxy is lower than that of OPPO and Xiaomi products. Therefore, the author has a strong commitment to the quality of the case, “Exclude models for which the case has not been released by Spigen from purchase candidates.”

The Galaxy A51 comes pre-loaded with the latest One UI 2.1. For me, I feel that the value of the Galaxy smartphone lies in this One UI, and even when I tried using the Galaxy A51, that impression did not change. The author is convinced that the Android system has the highest degree of perfection, apart from Color OS and MIUI.

The One UI has a light operation feeling even if it is an entry model, but the Galaxy A51 equipped with Exynos 9611 can also be operated very crisply. Coupled with the fact that the built-in memory is 8GB, I do not feel any dissatisfaction

A model equipped with a punch hole, which is the first experience for the author. I was happy with the small notch found on models such as OPPO, Samsung, and Xiaomi, but when I actually saw the Galaxy A51’s punch-hole camera, I was surprised at its compactness. The punch hole of the Galaxy A51 is still smaller than that of the model released around 2019.

With a punch-hole camera and a display that is stretched to the maximum, you can feel immersive not only in video content such as YouTube but also in games and browsing. Punch hole is an app that supports full-screen display, and you can take advantage of its strengths.

An effect that surrounds the punch hole appears when face recognition is performed on the lock screen or when the front camera is used for a video call. It’s a small accent, but I thought it was unique to a model equipped with punch holes.

The camera of Galaxy A51 is a quad-camera at the rear and a punch-hole type single camera at the front. Due to the nature of the site, this review does not give sample shots of the front camera, only the rear camera.

A new shooting pattern with a macro lens

One of the four lenses on the back of the Galaxy A51 is a macro lens. Macro lenses are rare on smartphones so far, but this allows you to enjoy photography differently than before.

The macro lens is literally prepared for “close-up photography”, and it is possible to shoot a subject at a close distance, which is usually difficult due to blurring (in the case of Galaxy A51, a distance of 3-5 cm is assumed). However, even if the lens is brought close to the subject, it will be in focus properly, so care must be taken not to accidentally bring the lens into contact with the subject.

Most manufacturers use plants as the subject when pushing the macro lens function. The Galaxy A51’s macro lens is also the most enjoyable way to shoot close to plants and insects. You can experience a new camera with food as the subject like a sample shot.

I like this macro lens. Unlike the entry model macro lens, it can be said that the degree of perfection is fully satisfactory for general users.

Even if you upload a photo taken with a single-lens reflex camera to SNS, many followers may not notice the lie.

One of the differences that amateurs notice when comparing photos taken with a camera called a single-lens reflex camera and a smartphone camera is the presence or absence of blur. Recent smartphones have also adopted what is called a depth sensor and AI technology, which makes it possible to measure the distance to the subject, and from there it is possible to take pictures with added blur.

The battery capacity of the Galaxy A51 is 4,000mAh. Regarding charging, it corresponds to 15W high-speed charging, which is not an extremely amazing number. Although it is average in Samsung’s Galaxy series, it still has a slightly conservative impression on the fast charging technology compared to the products of Chinese manufacturers. It takes less than 120 minutes to fully charge from 0% to 100% (15W charger included).

In my lifestyle, I mainly check SNS, make voice calls, and browse when I go out. The Galaxy A51 may be used for tethering in places where WiFi is not available. Charge the battery to around 80% and reconnect it to the charger when it drops below 10%. Even in this way, the battery will last for a day.

What I want from the Galaxy A51 is 25W fast charging and wireless charging, but you’ll have to look for a flagship to meet this requirement.