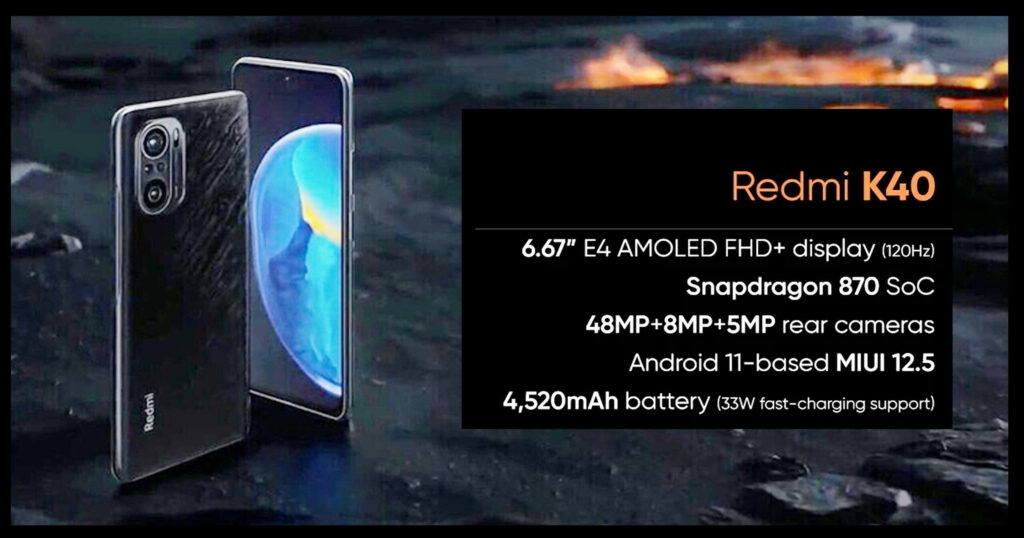 Xiaomi presented its latest smartphone Redmi K40, the top phone in its line of budget smartphones. While there are details that could exclude it from competing against the true premium mobiles on the market, it has a serious case for becoming a best seller.

Xiaomi has a solid and effective business strategy, which has led it to position itself as one of the largest smartphone manufacturers globally. This week, the Chinese brand Xiaomi has launched the Redmi K40, a mobile that is at the top of the catalog of this product line.

In this way, it is presented as the most capable smartphone of the Redmi sub-brand, which is very popular in several markets. For several years, it managed to establish itself as a competent alternative for those looking to get the best bang for their price.

The Redmi K40 has launched smartphones in the market with 3 versions: Standard, Pro, and Pro +. Although we will have to wait for the launch in international markets, we already know all the characteristics of this mid-high range mobile. While waiting to do the corresponding tests, it is shaping up to make a lot of noise in the category.

At the launch of the Redmi K40, the brand explained that all 3 versions carry the same screen. It is a 6.67-inch Full HD + AMOLED panel with a 120 Hz refresh rate, HDR10 +, and Grade A + from DisplayMate.

Since we addressed the issue of performance, the former also allows you to choose between configurations that include 6/8/12 GB of RAM with 128/256 GB of internal memory. For its part, the intermediate version is only available with 6/8 GB of RAM and 128 GB of internal storage, while the K40 Pro + can go with 6/12 GB and 128/256 GB.

Where we also find important differences is in the photographic hardware. The Redmi K40 has 3 sensors with the following configuration: 48 MP, 8 MP ultra-wide-angle, and 5 MP telephoto. The K40 Pro version equips a 64 MP main sensor and repeats those of 8 and 5 MP. Finally, the top variant changes in the formula the primary sensor for a 108 MP one. The selfie camera is the same for everyone with a 20 MP sensor.

Of course, the Redmi K40 comes equipped with Android 11 under the MIUI 11 customization layer. Other features are its compatibility with 5G networks, a 4,520 mAh battery with 33W fast charge, side fingerprint reader, stereo speaker, Bluetooth 5.1, NFC, and WiFi 6.

Prices of the new Redmi phone

At the moment, we only know the prices in Chinese currency for the Redmi K40 range. These range from 1,999 yuan in the most basic standard version to 3,699 yuan in the most complete K40 Pro + variant. The foregoing would yield a range of between 255 and 470 euros or, it’s equivalent in national currency, between 6,300 and 11,670 Mexican pesos.

There is no concrete information yet on the international launch of the Redmi K40, but rumors are circulating that it could reach several countries as POCO F3. Meanwhile, users can choose between white, black and blue.

What do you think of the design and performance of the Redmi K40? Do you like this phone? do not forgot to share and comment, We read you in the comments .