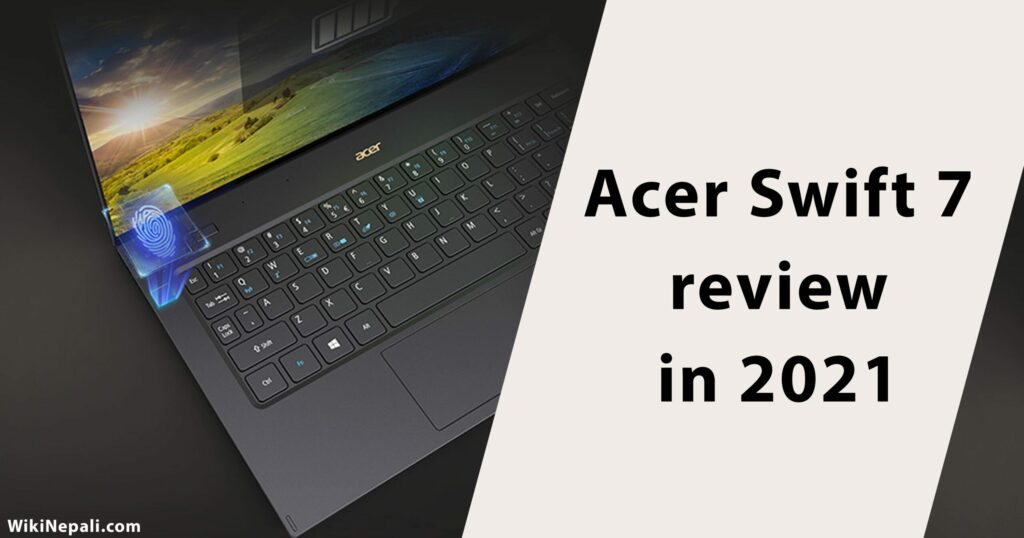 The Swift 7, A latest launch of Acer which stands out with Acer’s claim to be the thinnest laptop in the world, today it is in our hands.

The Swift 7, which Acer recently introduced and attracted attention with its design, finally took its place on our review table. The Swift 7, which we will review for the first time in our country, looks really stylish, but it has one more important feature than it: Acer has signed the world’s thinnest laptop with the Swift 7. Swift 7, which deserves the title of the first laptop with a thickness of less than 1cm, let’s see what it offers us in detail…

Thinnest in the world

Acer Swift is a very impressive laptop with its design. Swift 7, which can easily attract the attention of those looking for a laptop with a thin design, is currently the thinnest laptop with a thickness of 9.98 mm. The laptop from which he inherited the throne is HP Specter 13. If you remember, the Specter 13 was a model that pushed the limits with its 10.4 mm thickness.

This type of thin and light notebook computer is extremely convenient. For example, Sony VAIO 11, which we had the opportunity to review before, was one of them. The VAIO 11, which won the admiration of many users with its compact structure and long battery life, was also doing an important job with its touch screen. So, does Swift 7 have a touchscreen? Unfortunately not.

The screen size of the Swift 7 is 13.3 inches. The screen consisting of an IPS panel offers Full HD resolution. The screen brightness is extremely good. Let’s also say that it covers 97 percent of the sRGB color gamut.

Which has a black inner frame around the screen, offers us a golden background on the keyboard surface. Also, the material used here is just as beautiful. The weight of Swift 7, which is pleasing to the eye with its solid metallic surface, is 1 kilogram. So you can easily forget it when you throw it in your bag.

When we look at the peripheral connections of the Swift 7, we see that there are only two USB 3.1 ports and a headphone jack. Yes, there is no other physical connection on the device, unfortunately. In the face of the laptop being so thin, connections have been forgotten. We think that the original box will contain converter adapters, but they are not included in the test version of the device.

Swift 7 has a large touchpad area. This both makes the laptop look nice and adds great value in terms of functionality. The keyboard also provides comfortable and comfortable use. Again, since the model we have is an example, the keyboard keypad in this model is in English. Probably, the keypad of the model you will find on the shelves will be in Turkish. The key shortcoming of the keyboard is that the keypad is not backlit.

Good performance to meet the daily use

Let’s take a look at the technical staff of Swift 7. The device, which comes with the Intel Core i7 label, carries the Intel Kaby Lake, that is, this year’s processor. Swift 7, which owns the i7-7Y75 processor, which was launched in the third quarter of 2016, thus becomes an important model in terms of performance.

Swift 7 has 8 GB of DDR3 RAM. There is also a 256 GB SSD on the laptop. Operating in the 1.30 GHz base and 3.60 GHz ceiling frequency range with its processor, the laptop also owns the Intel HD Graphics 615 graphics unit.

To mention the values ​​we measured during the SSD test, the Swift 7, which can write 450 MB of data per second at the sequential reading point, sees 350 MB in the writing section. Meanwhile, in the game performance part, we can say that Swift 7 can play many games at medium graphics settings.

One of the highlights of the Swift 7 of course is its battery duration. This is not a gaming PC, it is a laptop that will be preferred for mobile use with its long-term working performance and compact structure. Swift 7, which can offer up to 9 hours of battery life according to Acer’s values, reached 9 hours during our tests. But of course, we have worked out different scenarios for this. We were able to reach the score of 8 hours and 52 minutes during Full HD video playback with a screen brightness of 30 percent. In the web browsing scenario, Swift 7, which performs around 7 hours – again under the same conditions – can consume its battery in 4 hours if you process more complicated scenarios.

Swift 7 became a laptop we liked. Obviously, Acer has done a good job and created a balanced laptop model. Swift 7, which we love for its design, fills this area not only with its appearance but also with its thin and lightweight. Swift 7, which can easily meet daily use with its Intel Core i7 performance, is also a good model with long battery life. The price of Swift 7 is stated as 4500 TL. Swift 7, which will go on sale in December in our country, can be considered as a good model with its price. Because the high price of the Specter 13 opposite makes the Swift 7 more affordable.

Swift 7, which will be the choice of users looking for a light and compact laptop, also meets the performance expectation.